Optiarc offers line of robust SSD, preventing data loss and failures due to latent flash issues Data retention has become an integral concern in the flash storage industry. As the capacity continues to increase with advanced 3D NAND flash memory technology, currently utilizing 96-layer memory cells, SSD manufacturers are able to increase flash memory storage while decreasing the devices physical footprint. The problem is that 3D NAND cells are built vertically in strings, meaning a defect in a single cell will most likely negatively affect the performance of the entire cell string. This minor contamination could lead to massive failure potentially causing total data loss.
It is with that security and vulnerability in mind that Optiarc focuses on maintaining data integrity to prevent potential catastrophic data loss across its series of SSD. Optiarc is able to ensure this high bar of excellence across their full SSD product line by utilizing the following implementations: * Source the best parts and components available, using higher material purity and prequalified 3D NAND chips.
* Fine tune the SSD firmware to better control the data flow and prevent errors or overloading at the cellular level. This regulates the flow of content and directs it to the appropriate cell(s), to prevent cells from potentially being over worked and also creates faster retention. Additionally, the firmware can detect if a cell has the potential to fail and balances the loading in that cell to prevent the possibility of failure and potential data loss.
* Implement intensive testing procedures that go far beyond the standardized mainstream testing process. Use state of the art hardware to test each element of every single SSD we produce to check the drive’s potential to fail, robustness of its memory and cellular structure, read / write speed optimization, and much more to protect against contamination and ensure long term reliability and stability.
Because of these 3 key factors; high caliber components, enhanced firmware, and intense testing, Optiarc is able to virtually eliminate the risk of data loss and corrupted data integrity across its entire line of SSD models.

While many SSD’s on the market tout their massive memory capacity, low costs, or lightning fast operating speed, it is all inconsequential if your SSD crashes. Optiarc is dedicated to offering affordable, high capacity, fast SSD’s, with a focus on preserving data and preventing corruption and data loss due to faulty components or memory. The risk of using a low grade SSD or any SSD that doesn’t perform adequate qualification procedures could have catastrophic affects, resulting in potential total data loss of the entire SSD. When it comes to the content on a person’s SSD, we believe it’s more important to protect the data stored on the drive, than taking the risk to save a few dollars. 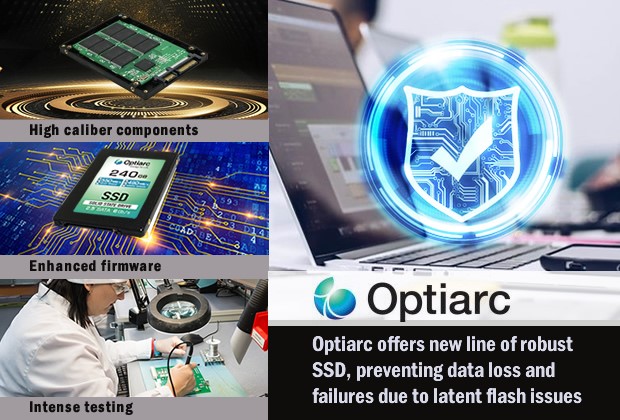